The CDR: repression in Cuba.

More videos about the CDR in Cuba

police. At the end of the 1980s, CDRs were reorganized, with each sector now consisting of several city blocks with one person assigned control. Each morning, the sector controller meets with the CDR officials (the president, vice-president, or other official), particularly those in charge of VOP, at each block and obtain the daily log of activities in that particular block.

The CDR officials have the duty to know the activities of each person in their respective blocks. There is an individual file kept on each block resident, some of which reveal the internal dynamics of households. For this reason Maida Donate-Armada (1996) says that “perhaps the greatest contribution (of the CDRs) to the history of world espionage may be to have raised to the level of counterintelligence the daily gossip (chismes) and disagreements (bretes) that go on at the neighborhood level. Citizens must be careful of their actions and of what they say, as they are being constantly monitored by the block CDR.

The structure consists of a president, vice-president, a treasurer, an organizer, an official responsible for the work force, and another for ideological control. CDRs al include an important component, referred to as the CDR Vigilance and Public Order Front (Vigilancia y Orden Público). After the September 1

986 CDR Congress, a special component (front) was introduced to assist those young people who neither work nor study. This division of the CDR is referred to as the Prevention and Education Front. This front notifies the police department of all pertinent information regarding young people who are neither in school nor working. CDR characteristics probably vary according to population size, prevalence of common crime or acts against the state, extremism of the CDR authorities, educational level, etc. An important variable is the lack of commitment of the rank and file at the local level.

Militancy in CDRs is interchangeable with other organizations such as the FMC, the communist Party, or the League of Young Communists. Any militant of the Party or of the Youth must show that he or she is a member of the CDRs and/or FMC. These last two organizations, together with the Party and the Youth are the most active at the local level. The statutes of the Cuban Communist Party of Cuba, Chapter VIII, Article 73, states:

“The Party guides and directs the work of the mass and social organizations, based on the principle of full and conscious acceptance of its leadership role and of the influence its members and aspirants have in the mass organizations, while recognizing the organic independence of those organizations.”19

Within each block, there is one other agent who deals indirectly with the CDRs: this person reports directly to an officer of the security apparatus of the Ministry of Interior. Very rarely are the secret duties of this person known to other block citizens or CDR officials. In order for a CDR official to be informed of the duties of this person, there must be a working relationship on a particular case. 19. As quoted in Ritter (1985, p. 277).

The organization of the CDRs by sectors and blocks follows the national-regional-province-municipalityzone-sector-block pyramid structure. The sector controller holds a full-time job. They patrol on foot since they do not have other means of transportation. 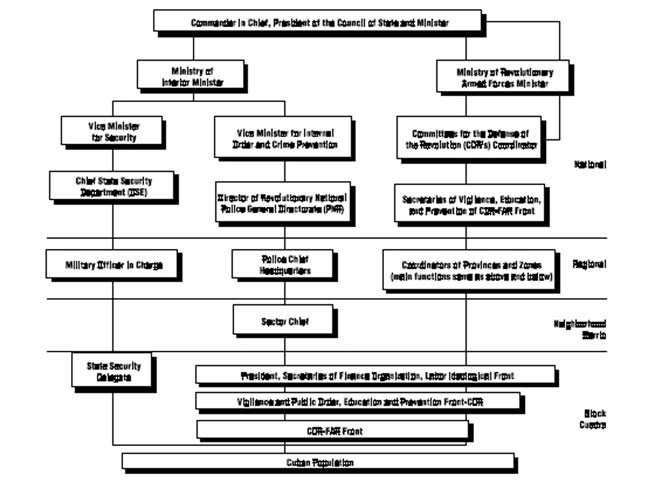 If enough evidence of wrongdoing is found regarding a particular citizen, the sector controller meets with that individual. Three warnings are given to each citizen, with the first two given in written form. After one warning, the citizen’s file is classified as category A; after two warnings, as B. The third warning results in the arrest of the citizen and classification of his or her file as category C.

There are national, provincial, municipal, and zone meetings for all CDR presidents, who then pass on the information to their block officials and citizens.

The VOP Front consists of people who have shown extreme loyalty to the revolution, and who are willing to go to great means to discover wrongdoing.

The background of the Front officials varies from retirees to people who have served in international missions.

The ideological control person usually has a college degree.

As is depicted in Figure 1, the Ministry of Interior and the CDRs have parallel structures. Security bodies

(intelligence and counterintelligence) and police back-stop this mass organization. Designation of officials for different posts within CDRs, especially for being in charge of “vigilance,” are subject to consultation with the MININT officer in charge.

This network in turn is linked to the chiefs of “defense zones” and territorial militia, which are the lower layer of the so-called “Republic of Cuba’s Unique System of Exploration” and the mobilization chain for any war action. “Defense zones” are in charge of evacuating the civil population and destroying cities and towns if the socialist system is in danger. These activities are connected to the Ministry of Armed Forces.

There are “Voluntary Brigades of Activists” that are mobilized according to instructions of the state security apparatus. The Brigades are sometimes called into action by the police. They are the direct antecedent of the so-called “Brigadas de Respuesta Rápida” (Quick Response Brigades) that hold “repudiation meetings” in front of the homes of undesirable neighbors, sometimes when it is known that they plan to leave the island. The Brigades are a sort of para-military organization backed by the Cuban authorities established for the purpose of harassing and fighting—physically sometimes, with sticks, bricks, and hammers—dissident neighbors and families.

The notion of civil society is alien to the policies that the Cuban leadership is pursuing at present. The theories of “transmission belts” and an “enlightened vanguard” suit more closely regime’s goals and modus operandi. The essence of civil society lies in the possibility that social groups could be autonomous, particularly from military and government tutelage and control. This is impossible in today’s Cuban society. The leadership has a horizontal circulation system that allows the same faces and names to transfer from government to mass organizations to military positions. This revolving system has been operating for 36 years.

The Party, the State and mass organizations are intertwined. To claim that Cuban mass organizations represent civil society is to deny that the latter has any right to exist as an independent force. This is the kind of participation Nazi and fascist regimes encourage, together with the “personality cult” of the leader. The revolutionary leadership and the leader himself have designed a totalitarian society; changes to the control mechanisms and reforms are attempts to strengthen this grip.

state security apparatus, operating as its eyes and ears on a daily basis. The CDRs were founded in 1960 as a defense against violent counterrevolution and developed into a ubiquitous mechanism of social and political control. The CDR system, like all mass organizations in Cuba, is organized like a pyramid. There is a national directorate headed by a national coordinator. At the next level are the fourteen CDR provincial committees, and beneath those are regional, municipal and zone committees. The zone CDRs oversee the individual block committees.41

CDR members spy on their neighbors and, in turn, urge them to spy on others and fill out "Opinion Collection Forms" about what they hear their neighbors and colleagues saying during the course of daily life, particularly their political opinions. The completed forms are then passed on by the CDRs to the police and MININT. The CDRs also rely on networks of chivatos, "stool pigeons," to gather information on people’s behavior.42 The CDRs operate in conjunction and overlap with the CTC, the UJC, the FMC, and the FEU, which perform the same functions in the workplace and in the schools. The failure to report criminal activity, including political "crimes," is itself considered a crime punishable under Cuban law.43 In assessing the penetration of the state into daily life, one young man said to the delegation from Pax Christi Netherlands, "I can’t even trust my friends."44

Another organization whose purposes include social and political control is the Territorial Troop Militia (MTT). The MTT was established in 1980 under the direction of the PCC and in 1992 had an estimated 1.5 million people under paramilitary discipline.45 The stated purpose of the MTT was to defend against foreign invasion, but the MTT is foremost a political instrument for mobilizing a discontented populace, intensifying political indoctrination and reinforcing a garrison state mentality.46

In sum, there is no official organization that is not geared to combat and root out dissent and disaffection with the political system. State Security, the array of PCC-controlled mass organizations and the MTT comprise an integrated system of organized surveillance and informing on a massive scale.

undercut the effectiveness of the CDRs to some extent, particularly in terms of their ability to mobilize great numbers of people for PCC gatherings and activities, another of their prescribed functions. However, during a ten-day trip to Cuba in the spring of 1995 by this writer, most ordinary Cubans in Havana and the provincial cities of Cienfuegos, Trinidad, Santa Clara and Matanzas reported that they remained intensely wary of CDR surveillance, even while conversing in their own homes.47 The delegation from Pax Christi Netherlands, which visited Cuba from July 15 to August 4, 1995, concluded:

Fear is the basic instrument of political control. The information at the State Security’s disposal can be used to threaten and intimidate anybody, including those who oppose the regime, to force them to go along with the established ideology…There is no place to escape the tentacles of the State. The distrust is unbearable.48

Pax Christi Netherlands believes, based on both official and dissident sources in Cuba, that there are currently about 80,000 CDRs.49 That means that with a population of a little more than 11 million, Cuba has approximately one CDR for every 140 people.

Transcribed and marked up by Jørn Andersen for Marxisme Online, 1998.

The membership of the CDRs - running to several millions - is certainly impressively large, but why exactly do ordinary workers participate in them?
Are they signs of Cuba being a qualitatively different society from our own in the West? All the indicators point to a rather more mundane explanation.
A recent article, for instance, argues that '...there is no way not to belong. or else you are really asking not to get anywhere in life', and points to the fact that it is virtually impossible to get an apartment, a better job - or even a refrigerator - without being a CDR member. What is more this influence is very pervasive, extending to all areas of life.

... the most popular TV programme in Cuba, Parabailar (for Dancing) which is a dance contest, requires that in order to participate you must participate in voluntary labor and belong at least to the CDR, or other so-called mass organizations, or the Communist Youth. [9]


Perhaps, under these circumstances, the wonder is that only 50% of the population are members of the CDR.

With a leadership appointed through the central bureaucracy of the Communist Party and with no powers to formulate policies, the CDRs certainly cannot, by any stretch of the imagination, be seen as anything other than bodies - mass bodies certainly - for the incorporation of the working class and of its subordination to the regime.