Audio and Video about Cuba 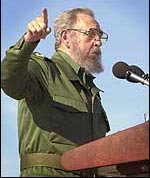 Cuba Verdad offers you both audio and video files on Cuba.

If you use Internet Explorer or similar browser, click here (browser compatibility).

The Castro and Chavez hoax calls:

July 18, 2003
"Santos and Ferrero's Castro Call"
Two Miami Radio hosts called Cuban President Fidel Castro and fooled him into thinking Hugo Chavez was calling. Enrique Santos and Joe Ferrero from WXDJ-FM, used real soundbites from Hugo Chavez and played them over the phone in a simulated conversational manner. Castro fell for it ...and how. This after Chavez was fooled 6 moths earlier. (Some strong language at the end)