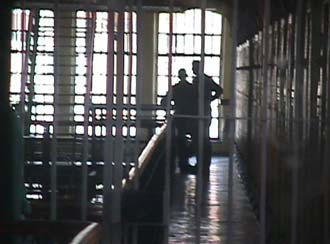 Imprisonment and other measures which result in cutting off an offender from the outside world are afflictive by... depriving [the person] of his liberty. Therefore the prison system shall not, except as incidental to... the maintenance of discipline, aggravate the suffering inherent in such a situation.

"Cuban prisoners of conscience, arrested in the crackdown two years ago today (18 March) have been beaten by guards while handcuffed and kept in tiny "punishment cells" infested with rats and cockroaches, according to a new report launched by Amnesty International today in Madrid."

In April 2005 independent sources reported a prison revolt with at least one dead in the "Combinado del Este" high security prison that had suffered a similar problem in March. A total of 3 persons are reported to have died. The dissident organization that broke the news stated that: "Tuesday's unrest was the result of excessive sentences, poor food and insufficient medical care at the prison"

For years human rights organizations have been decrying and protesting against prison conditions in Cuba. The government has been turning a deaf ear or has responded in May 2004 after 15 years with propaganda tours to freshly painted prison wards with "shiny happy prisoners" in the hope to undo some of the damage of years of international reporting. In December 2006 a report from the "Cuba Si" prison reported that inmates suddenly received bigger rations (+50%), medical attention was lavished on themand that the prison was also given a new coat of paint for an imminent visit.

Below some recent testimonies on the prison conditions people have to endure in Cuba:

"Isabel Ramos Martínez. says that he son's weight had dropped to 108 pounds when she last saw him in March. He suffers from an ulcers and other medical problems. He was also injured in a scuffle with fellow prisoners" http://groups.yahoo.com/group/CubaVerdad/message/15304

"Jorge Olivera, 43, was a Cuban TV commentator before quitting to work for an independent Internet press service--journalism that put

him in prison. First, he was the target of one of Fidelismo's organized neighborhood lynchings, the repudio. Organized by the political police, the repudio consists of stone-throwing, name-calling near-riots, all designed to make a dissident collapse and recant his thought crimes. (Olivera was forced to move and had his marriage destroyed after one such campaign). Thrown in jail
in 2003, he was crammed into a tiny cell with 18 other common-law prisoners, many of them dangerous murderers and drug dealers with psychological disorders (a co-habitation that is in itself a sadistically refined extra punishment), all forced to use a common toilet--which consisted of a hole in the floor. The food, deliberately rotten and containing little nourishment, is also designed to break down a prisoner physically and psychologically.

Manuel Vazquez Portal, 53, a poet and writer for the government-run cultural press for a decade, during which he won three official prizes before being purged, is described by the Le Monde journalist who talked to him as having the face of a man who has "passed through hell." That hell has a name: the notorious prison of Boniato, not far from Santiago de Cuba--it is the same, dilapidated 60-year-old prison in which Castro himself was incarcerated after his famous 1953 attack on the Moncada barracks. Vazquez Portal compares his 15 months in Boniato prison as "like living in a barracks latrine, or a pigsty"--subhuman conditions, inedible rotten food, water-logged cells in which the numerous leaks are never repaired and the floors are covered in the rancid, infectious liquid overflow from other cells. Three months of his sentence were spent in total, terrifying isolation." http://groups.yahoo.com/group/CubaVerdad/message/14358

"Then there was the distance. I was sent over 900 kilometers (560 miles) from my place of residence, which was an additional

punishment for my wife and my children. I was first at the Combinado Provincial de Guantánamo, and we were placed with common prisoners for 17 days. Then we were placed in solitary confinement. We had an hour a day to get some sun. I began having pain in my bones, due to the cell's humidity and the lack of sunlight. I was sick all of one year. The food arrived rotten sometimes, and the water was muddy and brown. I contracted parasites twice. I would tell the doctor: "Look, the food is poorly prepared and sometimes rotten. The water is contaminated; we should not drink it." And she would say: "That's not my problem. My problem is if you get sick."

And there were lots of insects: mosquitoes, scorpions, flies, ants, lizards. It was a terrible situation. All amid the indifference, the indolence by the medical services and the prison officers. I was later placed in a cell with common prisoners-pedophiles and murderers. Something terribly harsh and brutal goes on in Cuban prisons.

Hunger, alienation, the guards' willingness to beat up prisoners who in many cases do not deserve it-the prisoners become so alienated that they turn to self-mutilation. I saw two people make a hot paste by melting plastic shopping bags and then put their hands inside this substance. They lost their hands, which were amputated, and were released on medical parole. Other people stab themselves; swallow wires, small spoons; take fluids that are harmful to their digestive system. To sum it up, it's a world of horror." http://groups.yahoo.com/group/CubaVerdad/message/15189

Human Rights Watch published an extensive report on prison conditions in Cuba in 1999. In it it widely criticized most aspect of the Cuban judicial and prison system.

In it criticized the lack of openness of the Cuban regime:

"Cuba's refusal to allow domestic or international human rights monitors to conduct regular visits to its prisons casts a veil of secrecy over its extensive prison system, reportedly one of the largest per capita in Latin America and the Caribbean. Cuba refuses to disseminate even the most basic prison statistics, such as prison population figures. Cuba's Penitentiary Establishment Directorate, however, reportedly maintains a centralized, computerized system that would readily make available detailed information about all detainees in Cuba's prisons."

hold over 100,000 inmates. The same article puts the last visit of any international organization to Cuba's prisons in 1989 (International Red Cross). The UN estimated the number of prisoners in Cuba between 100,000 and 200,000 in its 1995 UNHCR Special Rapporteur's report. A figure of 100,000 or more makes Cuba the country with the most prisoners per capita in the world.

I refer to the extensive reports linked to at the top (HRW and Cubafacts) for a more detailed report on abuses in Cuba prisons.