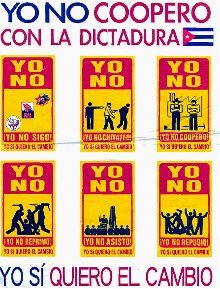 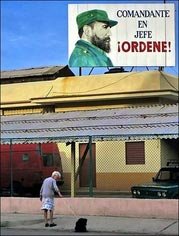 Cuba has a totalitarian system. It is no democracy. It tries to display some formal elements of democracy (elections, trade unions, NGO's,...), but once on looks beyond the surface it becomes clear that Cuba is no democracy.

The constitution defines Cuba as "an independent and sovereign socialist state of workers" (article 1of the 1976-1992 constitution). By this definition it already limits the options of it's citizens to select the socio-economic system under which they want to live. Similarly the freedom of expression is made subordinate to the socialist system: "Citizens have freedom of speech and of the press in keeping with the objectives of socialist society. " (article 53).  Any and all expression of dissent is prohibited and  a set of state run institutions are set up to control the people while claiming to exclusively represent their interests: "The Cuban socialist state recognizes and stimulates the social and mass organizations, which arose from the historic process of struggles of our people. These organizations gather in their midst the various sectors of the population, represent specific interests of the same and incorporate them to the tasks of the edification, consolidation and defense of the socialist society." thereby excluding all others (article 7)

Education also is totally subordinated to Marxist principles "the state bases its educational and cultural policy on the progress made in science and technology, the ideology of Marx and Martí" (article 39) and exclusive reserved to the state which promotes "the patriotic and communist education of the new generations" with freedom of expression limited by the requirement that "the content is not contrary to the Revolution".

Within this framework a system of "total social control" is set up that dominates all aspects of life of Cubans. Access to even the most basic of elements of life is controlled by organizations that are intertwined and exchange information.

"For this reason Maida Donate-Armada (1996) says that “perhaps the greatest contribution (of the CDRs) to the history of world espionage may be to have raised to the level of counterintelligence the daily gossip (chismes) and disagreements (bretes) that go on at the neighborhood level. Citizens must be careful of their actions and of what they say, as they are being constantly monitored by the block CDR. "

From the schools with their ""Cumulative School File." over the CDR with their files on all Cubans and records from work and from the state controlled organizations a detailed and comprehensive set of information is available to the Cuban regime.

This information controls a large part of the every day lives of the Cuban people. A "bad mark" is a constant threat to getting housing, a job, education, ...

The sheer absurdity and extent of this system is illustrated by the following anecdote:

"... the most popular TV programme in Cuba, Parabailar (for Dancing) which is a dance contest, requires that in order to participate you must participate in voluntary labor and belong at least to the CDR, or other so-called mass organizations, or the Communist Youth. [9]"

Given all these pressures and the oppressive legal environment it is no surprise that Cubans try to avoid at all cost to get noticed by the regime. They aim to "stay under the radar".

Those that do face severe repression and a life of hardship. Children are ejected from schools or refused education. People lose jobs. It takes a lot of courage and stamina to stand up to a system that has such a pervasive grip on people's lives.

The best known pro-democracy project is the "Varela project" . In March 2001, "Todos Unidos" as a group begins the collection of signatures for the  Proyecto Varela. It is seen as a plan for transformation and change they wanted to put jointly to the Cuban people. The principles of The Varela Project were seen as the first steps to create the necessary space for all Cubans be able to freely participate in the economic and political life of Cuba. The Varela Project hoped, through a legal and constitutional process, to put into law rights afforded to Cuban citizens in the Cuban constitution which are currently ignored. As always it ended in repression with some of its leaders like Leonel Grave de Peralta Almenares ending up in jail.

No freedom of speech. No free expression of the will of the people. No democracy in Cuba. That is the reality that the apologists of the Cuban regime deny.

U.S. State Department: Country Reports on Human Rights Practices: "Candidates for provincial and national office must be approved in advance by mass organizations controlled by the government. In practice a small group of leaders, under the direction of the president, selected the members of the highest policy-making bodies of the CP, the Politburo, and the Central Committee."

"In 2003 there were national elections in which 609 candidates were approved to compete for the 609 seats in the National Assembly. The CP was the only political party allowed to participate in the elections. A small minority of candidates did not belong formally to the CP but were chosen through the same government-controlled selection process. The government saturated the media and used government ministries, CP entities, and mass organizations to urge voters to cast a "unified vote" where marking one box automatically selected all candidates on the ballot form.

During the year there were elections for nearly 15 thousand local representatives to the municipal assemblies. After the first run-off election, the government reported that 96.6 percent of the electorate had voted. While the law allows citizens not to vote, CDRs often pressured neighborhood residents to cast ballots. According to the Cuban Commission for Human Rights, the government blacklisted those who did not vote. Although not a formal requirement, in practice CP membership was a prerequisite for high-level official positions and professional advancement."

Since 1976, official European Union policy towards Cuba has stated an objective "to encourage a process of transition to a pluralist democracy via constructive engagement with the Cuban Government." This goal is shared by all member states. The E.U. describe the Cuban decision-making process thus: "Elections for the National Assembly, where only candidates approved by the local authorities can partake, take place every five years. When the National Assembly, which meets twice-yearly, is not in session the 31-member Council of State wields legislative power. The Council of Ministers, through its 9-member executive committee, exercises executive and administrative power. Although the Constitution provides for independent judiciary, it explicitly subordinates it to the National Assembly and to the Council of State. Involvement in decision-making and implementation through non-political actors has been institutionalized through national organizations, linked to the Communist Party, representing farmers, youth groups, students, women, industrial workers, etc."

Cuba has been suspended from the Organization of American States (OAS) since 1962. The Inter-American Commission on Human Rights, an organ of the OAS, reported in 1997: "It should also be noted that the major criterion for preparing this report has been the lack of free elections in accordance with internationally accepted standards, thereby violating the right to political participation set forth in Article XX of the American Declaration of the Rights and Duties of Man, which states textually that: Every person having legal capacity is entitled to participate in the government of his country, directly or through his representatives, and to take part in popular elections, which shall be by secret ballot, and shall be honest, periodic and free."

"The nomination of candidates for election to the Municipal Assemblies is done by nominating assemblies, in which all voters are entitled to propose candidates. In practice, however, these district assemblies are usually organized by the Committees for the Defence of the Revolution or the Communist Party, which makes the selection of an opponent of the regime most unlikely."

In 1999, the non-governmental organisation Freedom House initiated "the Cuban Democracy Project". The project was set up to support and encourage Cuban independent journalists, human rights activists, independent political parties, trade unions, and other organizations. Freedom House is solely responsible for the objectives and planning of the project and for its administration. Freedom House has also given Cuba the lowest rating in its: "Freedom in the World 2005" report for political rights, and the lowest rating in its "electoral democracy" category.

The Freedom House 2005 report states: "Cubans cannot change their government through democratic means. Fidel Castro dominates the political system, having transformed the country into a one-party state with the Cuban Communist Party (PCC) controlling all governmental entities from the national to the local level. Castro is responsible for every appointment and controls every lever of power in Cuba in his various roles as president of the Council of Ministers, chairman of the Council of State, commander in chief of the Revolutionary Armed Forces (FAR), and first secretary of the PCC. In October 2002, some eight million Cubans voted in tightly controlled municipal elections. On January 19, 2003, an election was held for the Cuban National Assembly, with just 609 candidates - all supported by the regime - vying for 609 seats. All political organizing outside the PCC is illegal. Political dissent, spoken or written, is a punishable offense, and those so punished frequently receive years of imprisonment for seemingly minor infractions."

In 2002 former U.S. President Jimmy Carter spoke in Havana with support from Human Rights Watch and representing the Carter Center. Whilst calling for democratic change, Carter also stressed that he was not using a U.S. definition of "democracy." he explained that "the term is embedded in the Universal Declaration of Human Rights, which Cuba signed in 1948. It is based on some simple premises: all citizens are born with the right to choose their own leaders, to define their own destiny, to speak freely, to organize political parties, trade unions and non-governmental groups, and to have fair and open trials."

Human Rights Defenders in Cuba from Human Rights First states: "Cuba remains the only country in the Western Hemisphere to reject democracy and effectively outlaw peaceful advocacy for human rights and democratic reforms. Independent civil society in Cuba – including human rights defenders, democracy activists, and independent journalists and scholars – are the targets of constant persecution. The universally-recognized rights to freedom of expression, association and assembly are systematically violated by the State and victims have virtually no means of redress within the judicial system."

Cuba's supporters argue that the Cuban system is more democratic than that used in multi-party democracies, but without freedom of speech no true democracy can exist.

Whatever the merits of the system for electing the National Assembly, that body is itself a facade for the reality of PCC rule in Cuba. The Assembly meets only twice a year for a few days. The 31-member Council of State, in theory elected by the Assembly but in practice appointed by the PCC, wields effective state power, and the PCC Politburo, as in all communists states, is the ultimate political authority. Although the Assembly has eight standing committees, they do not exercise any effective authority over legislation. During its biannual plenums, the Assembly plays a passive role as audience for various government speakers. Once the Council of State's legislative proposals have been presented, they are summarily ratified by unanimous or near unanimous vote of the Assembly.

"Local elections candidates are nominated in open meetings run by the CDR (Committees to Defend the Revolution) that are closely linked to police and security forces. They report and sanction dissent. Prison terms of 4 years threaten those that openly oppose the regime in that public meeting filled with informants. People not supporting can be threatened with losing their home and jobs."