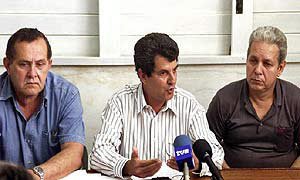 Héctor Palacios was formerly an official in the Cuban Communist Party. He left the party in 1980 as a response to what he perceived to be the Cuban government's harsh repression of Cubans wanting to emigrate from the island. Since 1980, Palacios has advocated for reform in Cuban government and has been active in opposition politics. Mr. Palacios has also been an active organizer for the Varela Project and is an independent librarian.

Mr. Palacios' recent imprisonment is not his first confrontation with the Cuban government. He was arrested in 1994 during a protest following the attempted hijacking of local ferries from Cuba's coast. Mr. Palacios was subsequently jailed in 1997 for "disrespecting" the Cuban government during an interview with a German television station. In 2000, Mr. Palacios and Mr. Oswaldo Payá Sardiñas were detained for drawing international attention to the human rights situation in Cuba by meeting with heads of states during the Ibero-American Summit in Havana.

In a press conference given by Felipe Pérez Roque, Cuban Minister of Foreign Relations, on the trials and convictions of 75 Cuban dissidents, Mr. Palacios was condemned for allegedly having "official status" at the U.S. Interests Section in Havana and distributing to other dissidents money that illegally entered Cuba. He has received a 25 year sentence based on these charges as well housing an independent library whose collection is said to be subversive and counterrevolutionary. Mr. Palacios is currently serving his sentence in Kilo 5 ½ prison in the Pinar del Rio province in Western Cuba.

In a letter to his wife, Gisela Delgado Sablón, in May 2003, Mr. Palacios wrote, "… fighting for what is just is the only way to experience happiness." Ms. Delgado has joined with wives of other political prisoners to publicly protest the unjust imprisonment of their husbands.