News items on the "Primavera Negra" 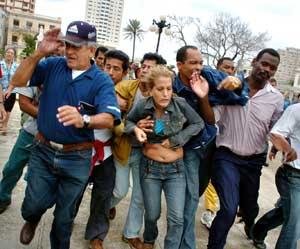 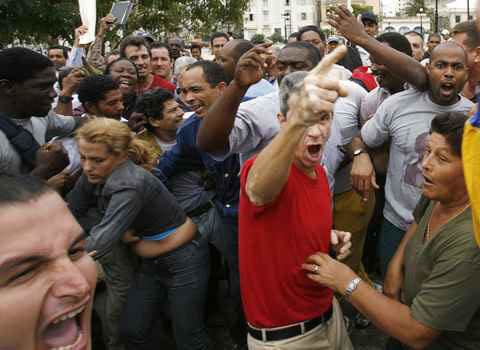 Visit the moving testimony of relatives as their problem is our problem too.

On March 18 2003 Castro moved against dissidents in Cuba while the world watched the invasion in Iraq. The Cuban regime arrested 75 dissidents and used the repressive laws it has in place to condemn them to long prison sentences.

People have no forgotten them and in lots of countries protests were staged (in 2006) to remember and support these prisoners of conscience. A leader that feels that he can not allow freedom of speech is a leader that knows he is a dictator.

"The Cuban government is based on lies and cheap propaganda. That's why it is afraid of words and the truth.".(see press report) is what Raul Rivero said. He is right. Let's break that wall of silence.

The Cuban government sentenced some 75 human rights defenders, independent journalists, economists and librarians to up to 28 years in prison in the harshest crackdown on freedom in Cuba in years. The government’s actions have been widely condemned by human rights organizations, foreign governments and the United Nations.

The activists were arrested, tried, and sentenced on charges of “disrespect” toward the Revolution, “treason,” and “giving information to the enemy.” The real reason for their imprisonment appears to be their non-violent promotion of human rights and democracy. Many of the imprisoned dissidents were organizers or supporters of the Varela Project, a constitutionally-based civic initiative that collected signatures on a petition calling for a referendum on democratic reforms and respect for basic freedoms.

Family members of the dissidents have reported that they are being held in substandard conditions, in small, dimly lit cells with poor ventilation. Adequate medical attention has also been denied to several critically ill dissidents.

Since 2003, some of the 75 arrested in the crackdown have been released on "medical parole" due to poor health, but they could be sent back to prison at any time and have been threatened with it often.

Pictures from the 2006 protests.

On the 5th anniversary of the largest crackdown against political opponents in Cuba, Amnesty International today called on the new Cuban authorities to immediately release the 58 dissidents still being held in jails across the country.

"Five years is five years too many. The only crime committed by these 58 is the peaceful exercise of their fundamental freedoms. Amnesty International considers them to be prisoners of conscience. They must be released immediately and unconditionally," said Kerrie Howard, Deputy Director for Amnesty International's Americas Programme.

"The new Cuban President, Raul Castro, has to follow the recent positive actions by tackling some of the most pressing human rights issues in the country – including judicial review of all sentences passed after unfair trials, the abolition of the death penalty and the introduction of measures to guarantee freedom of expression and independence of the judiciary," said Kerrie Howard.

Fifty-five of the 58 current prisoners of conscience in Cuba are the remainder of a group of 75 people jailed in the context of a massive crackdown against the dissident movement in March 2003. Most of them were charged with crimes including "acts against the independence of the state" because they received funds and/or materials from the United States government in order to engage in activities the authorities perceived as subversive and damaging to Cuba. These activities included publishing articles or giving interviews to US-funded media, communicating with international human rights organizations and having contact with entities or individuals viewed to be hostile to Cuba. The men were sentenced to between six and 28 years of prison after speedy and dubious trials. Twenty have so far been conditionally released on medical grounds.

Among the jailed political opponents is doctor and human rights defender Marcelo Cano Rodriguez. He was arrested in the city of Las Tunas on 25 March 2003 as he was investigating the arrest of another doctor, Jorge Luis García Paneque, detained during the crackdown on dissidents on the island. Marcelo Cano Rodríguez was tried, convicted and sentenced to 18 years in prison. The activities the prosecution cited against him included visiting prisoners and their families as part of his work with the Comisión Cubana de Derechos Humanos (Cuban Human Rights Commission); and maintaining ties to the international organization Medicos sin Fronteras, Doctors without Borders. He is currently being held in Ariza prison in the city of Cienfuegos, around 250 km south-east of his home in the capital, Havana, where his family lives making family visits difficult.

"By continuing to hold political opponents for exercising fundamental freedoms, the Cuban authorities are failing to step up to their human rights commitments," said Kerrie Howard.

A full list of the 58 political activists unfairly imprisoned in Cuba will be available from 18 March on:
http://www.amnesty.org/en/news-and-updates/news/cuba-list-prisoners-of-conscience

A regard for common decency has never stopped either Fidel or Raúl Castro from punishing political dissent even as they pretend to support internationally recognized standards of freedom. As long as they have something to say about it, Cuba will never abide by any commitment to respect basic human rights. Rarely, however, has the hypocrisy and
cynicism of Cuba's leaders been as evident as it is this week, on the fifth anniversary of the so-called ''black spring'' of March 2003.

While world attention was focused on the invasion of Iraq, the Castro brothers seized the moment to arrest nearly 80 dissidents on the island in one of the harshest crackdowns on government opponents in recent years. Today, many of them remain among the estimated 234 prisoners of conscience held in Cuban jails. They include at least 19 of the 27 journalists who were arrested during that period and unfairly sentenced to prison terms ranging from 14 to 27 years.

Carting political dissidents off to jail is standard operating procedure in Cuba. So are long sentences and harsh treatment. What distinguishes this particular event on this sad anniversary is that Cuba recently signed two agreements designed to promote standards of human freedom around the world. They are:

• The Covenant on Civil and Political Rights. It guarantees ''civil and political freedom,'' including the right to self-determination, freedom of expression, peaceful assembly, freedom of religion, privacy, freedom to leave a country, and equal protection before the law.

• The International Covenant on Economic, Social and Cultural Rights. It requires countries to ensure the right to work, fair wages, freedom to form and join trade unions, social security, education and the highest attainable standard of physical and mental health.

The documents were signed at the end of February, days after the official transfer of power to Raúl Castro by his ailing brother. Some saw it as a promise of change, but there's little sign of that. Cuba remains one of the most censored nations in the world. Only China has
more journalists behind bars. Not surprisingly, Foreign Minister Felipe Pérez Roque said his government would submit what he called ''interpretations and reservations'' regarding certain provisions. We can hardly wait.

Raúl Castro's presidency has done nothing to improve human rights beyond a few timid gestures, such as making it easier to buy computer equipment. Other countries must continue to press for the release of the victims of the ''black spring'' of 2003. As long as the dissidents remain in jail, Cuban signatures on international agreements will remain
meaningless.