In Cuba control starts at school. 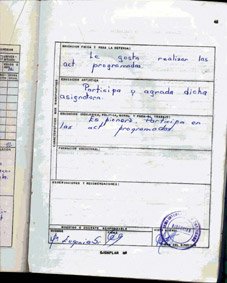 For Elian, absolute control by the Communist party will begin in elementary school with the so-called "Cumulative School File." This is a little like a report card, but it is not limited to academic achievements. It measures "revolutionary integration," not only of the student but also of his family. This file documents whether or not the child and family participate in mass demonstrations, or whether they belong to a church or religious group. The file accompanies the child for life, and is continually updated. His university options will depend on what that file says. If he does not profess a truly Marxist life, he will be denied many career possibilities.

From his elementary school days on, he will hear that God does not exist, and that religion is "the opium of the masses." If any student speaks about God, his parents will be called to the school, warned that they are "confusing" the child and threatened. The Code for Children, Youth and Family provides for a three-year prison sentence for any parent who teaches a child ideas contrary to communism. The code is very clear: No Cuban parent has the right to "deform" the ideology of his children, and the state is the true "Father."

Article 8 of that same code reads, "Society and the state work for the efficient protection of youth against all influences contrary to their Communist formation." It is mandatory for all Cuban children over the age of 12 to do time in a Communist work camp in the countryside. Away from all parental supervision for nine months at a time, children there suffer from venereal disease, as well as teenage pregnancy, which inevitably ends in forced abortion.

Originally published in the May 5, 2000: The Wall Street Journal as A Firsthand Account Of Child Abuse, Castro Style.

This cumulative school file and the report of the CDR will decide what further education options are open to the person.

"While everything about the running of CDR meetings seems terribly informal, persistent failure to attend is noted and is commented on, often at the meeting itself. Social pressure guarantees almost full attendance, so the CDR serves as an important focus of social control.

This has an immediate impact on students as they move from school to either university or work. When a candidate for medical school attends the first interview, he or she must carry with him or her a character reference from his CDR. Each CDR intimately knows each of its members and their families. It is almost impossible for a young person to achieve anonymity in such a society or to have a "private life" that is not invaded by one's "public life" or professional development. "

In 1994 in a UNHCR report the Special Rapporteur, Mr. Carl-Johan Groth wrote:

16. On the basis of direct testimony, contacts with analysts of the Cuban experience and abundant written documentation, the Special Rapporteur has been able to note the excessive control exerted over the population via the institutional machinery. This has resulted in a systematic violation of, inter alia, the principle of non-discrimination on political grounds and the right to freedom of opinion and expression. This control is applied in the day-to-day life of every citizen - in the workplace, at educational institutions and even at the neighbourhood level. Education itself also has an ideological orientation, to judge from the Constitution, article 38 of which states that parents have a duty to contribute actively to the all-round education and training of their children as useful citizens prepared for life in a socialist society, whereas article 39 stipulates that the State bases its educational and cultural policy on Marxist ideology, and promotes patriotic education and communist training of the new generations.

17. According to the information received, the so-called "cumulative school record" and "employment record" make it possible to monitor the ideological integration of individuals virtually throughout their lives, by including not only purely academic or employment-related material, but also information regarding their membership in mass organizations, functions performed in such organizations, level of activism, ideological features of family members, misconduct, etc. Often individuals are expelled from educational institutions, dismissed from their jobs or subjected to some form of discrimination for expressing, in some way, views inconsistent with the official ideology.

Also visit the Human Rights and education page in Cubaverdad that has an interesting document that was presented by Sebastian Arcos Cazabon to the United Nations Human Rights Commission in Havana, Cuba, September 6 of 1988.