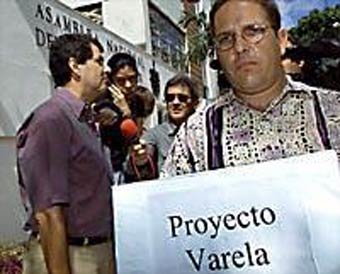 Archive search on "Paya" or "Proyecto Varela" or "Varela Project"

Between 1996 and 1997 Payá drafts the Varela Project. In 1998, the Movimiento Cristiano Liberación, MCL, publicly starts promoting the Varela Project and begins collecting signatures for a referendum. In 1999, along with other opposition leaders, Oswaldo Payá drafts the manifest titled "Todos Unidos" (All Together). For the first time the opposition comes together to support a common goal. In March 2001, "Todos Unidos" as a group begins the collection of signatures for the  Proyecto Varela. It is seen as a plan for transformation and change they wanted to put jointly to the Cuban people. The principles of The Varela Project were seen as the first steps to create the necessary space for all Cubans be able to freely participate in the economic and political life of Cuba. The Varela Project hoped, through a legal and constitutional process, to put into law rights afforded to Cuban citizens in the Cuban constitution which are currently ignored. By putting into law constitutional rights, those that took the initiative hoped to cement the respect for these rights and have them be guaranteed to all Cubans.

The Varela Project aims to bring into law:

Todos Unidos wanted to present the Varela Project to the Cuban people through the format of a referendum process that was guaranteed by the Cuban Constitution, Article 88G. The referendum process states that legal initiatives obtaining more than 10,000 signatures will be considered.

Although the initiative was entirely within the  framework of the Cuban constitution and notwithstanding the support expressed by ex-president Carter at the University of Havana, the Cuban regime acted against all those involved and people were expelled from work, university or school for merely supporting the initiative. Lots of the promoters were thrown in Jail. A significant fact was the lower Catholic clergy did actively support the project. The Varela Project finally was able to gather over 24,000 signatures. Castro declared the campaign invalid and subsequently changed the constitution so as to block future requests for referenda.

The Varela Project is named after the great Cuban philosopher, patriot, and defender of liberty, Father Felix Varela (1788-1853). José Martí said of Fr. Varela, “the man who taught the Cuban people how to think.”