Is Cuba a "Workers Paradise"?. 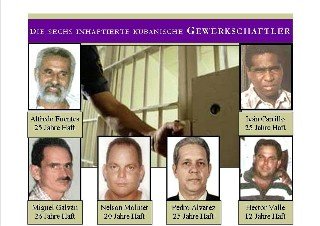 Trade unionists in jail in Cuba.

Note: I have added links to current news on persons and organizations named.

The Cuban authorities only recognise a single national trade union centre, the Central de Trabajadores Cubanos (CTC). The Labour Code, which was published in 1985, does not provide for any genuine freedom of association. The government explicitly prohibits independent trade unions, though it claims there is no legal requirement for workers to join the CTC.

The government has told the ILO that it is undergoing a comprehensive revision of its Labour Code. A new code is unlikely to guarantee genuine freedom of association, as the government maintains that existing laws already do so. According to the Cuban authorities "Freedom of association, protected in Convention 87, does not translate into the false concept of 'trade union pluralism' imposed by the main centres of capitalist and imperial power."

The Labour Code requires that in order to be valid legally, collective agreements must be discussed and approved in workers' meetings and be formally declared in writing and signed by the parties. Any modifications or additions must be approved in workers' meetings and signed by the parties, i.e. the employing body as well as the trade union organisation.

The State controls the employment market and decides on pay and working conditions in the State sector. In the private sector, the 1995 Foreign Investment Law requires foreign investors to contract workers through State employment agencies. The investors pay the agencies in dollars, but the agencies pay the workers the equivalent figure in pesos, pocketing up to 95 per cent of their salaries.

There is no legislation covering the right to strike. According to the government there is no need to call strikes since the demands of official trade union organisations will always be heard by the authorities.

Any attempts to form free trade unions are obstructed by the government, chiefly via restrictions set out in the Associations Act (Ley de Asociaciones). Anyone who engages in independent trade union activity runs the risk of being persecuted and losing their job. Workers are required to keep an eye on their colleagues and report any "dissident" activity. Independent labour activists are periodically arrested, harassed, threatened with prosecution and pressurised into going into exile.

Those organisations that do exist are unable to represent workers effectively. As they are not recognised, they cannot engage in collective bargaining or take strike action. Workers are not able to exercise their rights or to take part in peaceful marches or demonstrations in support of their demands. Independent organisations have been set up by dissidents opposed to the Castro regime, and though they do defend union rights, their main concern is fighting the regime and promoting respect of general human rights. Their offices have been searched, equipment confiscated and communications intercepted. Some of these unions have been infiltrated by State security agents.

About 200 dissidents held a public meeting in May, which the organisers claimed was the first such gathering since the 1959 revolution. In July, Hurricane Dennis caused widespread destruction and left 16 people dead.

Juan Antonio Salazar, of the independent trade union "Sindicato Libre de Trabajadores de Cuba" was arrested by two police officers on 10 January. They did not explain why he was being arrested at the time, but he was later charged with making threats, about which he knew nothing. Juan Antonio Salazar had earlier received a summons to the police station. He chose to ignore it because it was not on official paper, had no official stamp, and was not spelt or written correctly. His nephew, who was with him at the time of his arrest, believes the real reason was his trade union and political activities, notably his participation in the celebration of international human rights day on 10 December. Independent trade union leaders still in prison

Six of the seven free trade union leaders who were jailed in April 2003, together with 66 dissidents who oppose the Castro regime, remain in prison. The trade union leaders received sentences ranging from 12 to 25 years. The seventh, Carmelo Diaz Fernandez, was released on medical parole in June 2004, to serve the rest of his 16 year sentence either in hospital or at home, depending on his state of health.

Calls from the international trade union movement and the ILO for the release of the prisoners have met with total resistance. The government denies that the people concerned are trade union leaders, and says they were not jailed for trade union activity.

Darelys Velazquez Falcon (the wife of Hector Raul Valle, Vice-President of the CTDC)
Miguel Galvan Gutierrez (a Deputy Director of the CNCSL)

For more about them see the 2005 report.

Cases before the ILO's Committee on Freedom of Association

The Committee also examined a complaint, presented by the ICFTU, against the Government of Cuba alleging injuries, detentions, acts of intimidation, harassment and the refusal to grant legal personality to the Confederation of Democratic Workers of Cuba (CTDC).

Noting "that those responsible for acts of anti-union discrimination should be sanctioned", the Committee stated "that measures depriving trade unionists of their freedom on grounds related to their trade union activity, even where they are merely summoned or questioned for a short period, constitute an obstacle to the exercise of trade union rights". It requested the Government of Cuba "to guarantee in law and practice the right of all workers and employers, without distinction whatsoever, to establish independent trade union organizations of their own choosing, outside any existing trade union structure if they so desire (...) and the right to elect their representatives in full freedom".

http://www.ilo.org/public/english/bureau/inf/pr/1996/39.htm
In the case of Cuba, the Committee referred to the long-standing issue of the authorities' recognition of only one trade union central , which is controlled by the State and by the Communist Party, and the consequent prohibition of independent trade unions.

In particular, the Committee noted the extremely harsh sentencing (between 15 and 26 years imprisonment) of seven trade union officials coming from the Single Council of Cuban Workers (CUTC), the Independent National Workers' Confederation of Cuba (CONIC), and the Confederation of Democratic Workers of Cuba (CTDC).

The Committee emphasized that workers should have the right to establish, in full freedom, the organizations that they consider necessary, irrespective of whether or not they support the political, social and economic model of the country, and that it is for these organizations to decide whether they should receive funding for legitimate activities in the promotion and defence of human and trade union rights.

For more info on the International Confederation of Free trade Unions: www.icftu.org